New Music: The Beatles' "With a Little Help From My Friends"

With a Little Help From My Friends
(Lennon/McCartney; arr. Brent Scheihagen)

Originally performed by the Beatles


This month's song was recorded as a "Thank You" for my friends and family; it was my birthday recently and I felt very fortunate to receive so much kindness from so many. The timing was also appropriate as an exhibition about the Beatles was coming to a close here in Taipei. My wife and a few friends attended the exhibition in its last weekend and, afterward, were joined my more friends and family for a birthday lunch. The weather was gorgeous, bright and clear after many a frigid, wet and gloomy day during the passing winter.  I really feel very fortunate to have the life that I do and I know that much of it is due to having so many good people around me. Let this song be my wish that you are  also surrounded by friends and loved ones. So, this one's for you!

As for the images you see here, these are just a bit of simple experimentation with photo and digital manipulation.  I'm not even sure that the image is particularly clear to anyone, but it should be apparent that there are people in the picture. In fact, the image was created by laying several pictures over each other, so you can see a few other faces and images if you look at it from different angles, but mostly it becomes just a kaleidoscopic crayola collage of melting colors and shapes. It actually might seem a bit creepy if you think about it like that, so ... uh ... never mind.

The other obvious connection between this image and the song, besides featuring several friends, is a very vague similarity to the album cover on which the song was originally featured. Of course, I'm referring to the Beatles "Sgt. Pepper's Lonely Hearts Club Band", but other than featuring rows of people and a late 60s penchant for psychedelic colors, the resemblance stop there. Enjoy it for the simple mess that it is and have fun hunting faces! 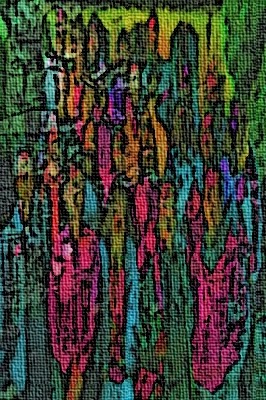