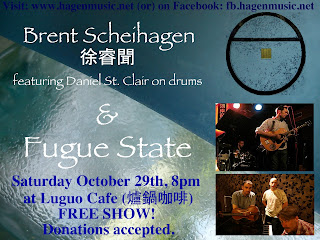 It will be a double bill: one set of music by Mr. Scheihagen featuring the excellent Daniel St. Clair on drums and another set of music by the 'modern chamber group', Fugue State.  Brent will be joining FS on bass and backing vocals.

Email ThisBlogThis!Share to TwitterShare to FacebookShare to Pinterest
Labels: PERFORMANCES

"Un Poquito Mas" is one of several instrumental pieces written by Patricia Islas for the instrumental Jazz-fusion group, Team Islas.  Ms. Islas is one half of the team's two core members, the other being Doug Bush, the drummer.  Team Islas has been supplemented over the years by a changing roster of honorary team members such as Brent Scheihagen (on guitar) and Hillary Early (on bass).  Team Islas continues to perform and write music are primarily based in the North Texas area where Doug and Patricia also teach music to hundreds of North Texas students.

Brent was fortunate to perform several times with Team Islas in late 2008 to early '09 before making the decision to migrate to Taiwan.  This is video from one of those performances and we'll be adding others to our VIDEOS PAGE, so check those out as well!

Posted by Daniel Hagen at 11:52 PM No comments: 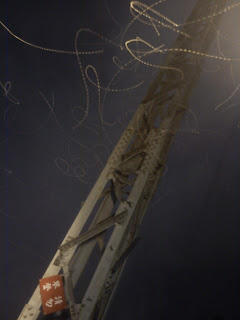