In keeping with the previously published Fragment, here is another bit of writing--actually two bits--that lives in its own little space. While I will let the writing speak for itself, I should mention that the background image is borrowed (without permission) from a graphic novel titled 'Neurocomic' written and illustrated by Drs Matteo Farinella and Hana Ros, and published by Nobrow Press.
And of course, the lyrics that make up the second part of this Fragment are a parody of "Home on the Range", considered one of the 100 greatest songs of the American West. It speaks to my origins, I suppose ... Sing along, everybody!!! 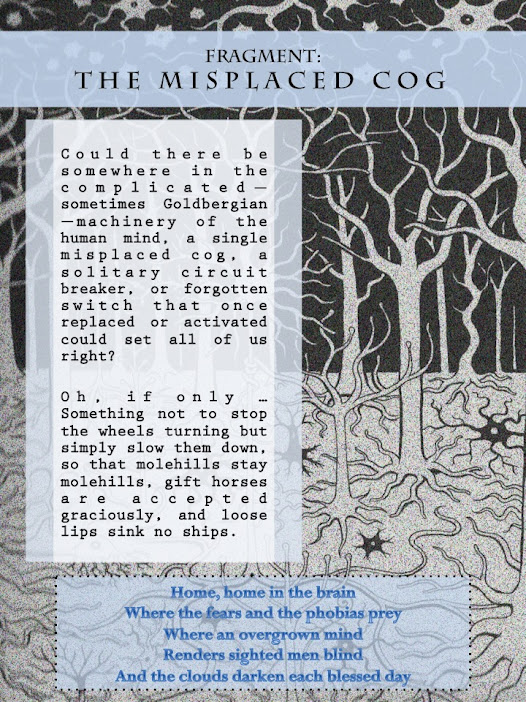 In an interesting occurrence of serendipity, not long after I wrote the above, I came across an interview on the YouTube channel Theories of Everything, hosted by Curt Jaimungal. In an interview with theoretical physicist Abhay Ashketar, Prof. Ashtekar discusses something very much along these lines. The particular part of the discussion, of what is a very long interview, begins at about 19:30 and continues for about four minutes. Much of the interview is about mathematics and physics that is unfortunately beyond on the capacity of this particular mind but for the first 30 minutes or so. The channel is generally quite interesting if you're into some ... headier topics. ;^)
Posted by Daniel Hagen at 8:41 AM No comments:

The first of many perhaps, I hope and intend for Fragment to be a series of brief writings of various types, whether musings on a particular topic or brief explorations of as yet undeveloped ideas. Ideally, the fragments as presented will have a completeness in of themselves that will not require any more than a page. This first Fragment has, in my humble opinion, that sense of completeness.
I've long been fascinated by dreams--by my own dreams as much as dreams and dreaming in general. There have been many a morning when a dream was so vivid and yet so bizarre, so muddled and yet so full of meaning, that I had to write it down as soon as I could. The following is a fragment of one such dream, merely a piece of a longer dream of which only this piece remained powerfully resonant as the new day broke upon my slumbering consciousness. I've titled it Pia Mater, Latin for "tender mother", also name of the third and lowest of the meningeal layers that surround the brain and spinal cord. While modern science remains unable to delve too deeply into the nature of dreams, the title struck me as appropriate, suggestive of a place in the mind where even trepannists fear to tread. - DH
P.S. Future fragments will feature far less prelude, certainly shorter than the pieces themselves! 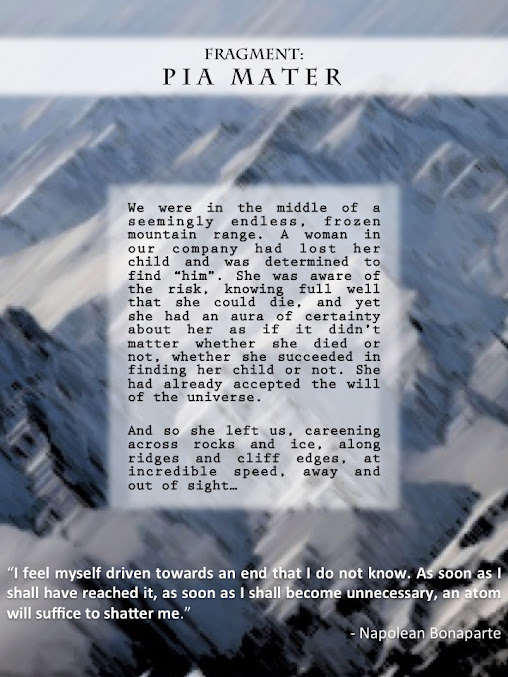 Posted by Daniel Hagen at 8:57 AM No comments: