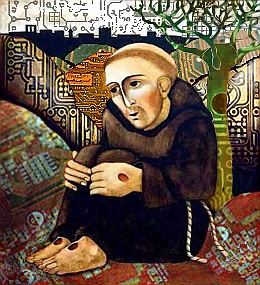 You say you’ve got spirit
but I just don’t feel it
And all that we feared is coming round
You say it’s a breakthrough,
but I don’t believe you
And all that we can do is suffer now

Even in this dark night,
I’ll tell you it’s all right
But you must be your own light
To guide you on

*          *          *
Originally titled "The Impossibility of Sainthood," this song is another which has taken a long time to develop into its full fruition.  The music originated with a piano piece which originated with a guitar piece going back to the mid-90s(!).  The lyrics were first written in 2001 apart from the third verse.  The song had already been given the title mentioned above, so it should be no surprise that the last verse came to mind after I had finished reading St. John of the Cross' "Dark Night of the Soul" in 2006.  The music, notably the harmonic modulation of the bridge, was completed around the same time.

After recording this version almost entirely with the use of midi, the song came to sit much more profoundly in a modern context.  (You can here an original version here.) Saints are not people that we come into contact with much in this day and age, nor is it easy to live a monastic life surrounded as we are by ever-expanding technology.  The art which graces the song therefore was, in turn, inspired by the new recording.  I don't know where the original painting comes from or who painted it, but I adapted it so that the figure - St. Francis of Assisi, a favorite saint of mine - was now in a world in which everything consisted of circuitry, even the sky.  So, is this the Electric Monk, or does he come next?

The other accompanying images were developed from my own photos.