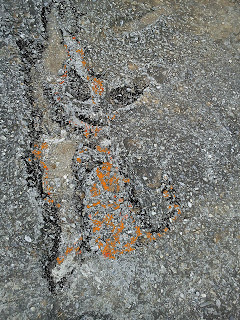 During the last several months, while Brent wasn't attending classes or doing homework, he spent time rehearsing and performing with his friends in Fugue State.  Filling in on the bass (the first time he performed playing this instrument), Brent had a lot of fun playing some good rock'n'roll, not to mention more than a few original tunes by members of the band.  Despite having such a good time, Brent always felt that he was just helping out Fugue State until he could get back to his own music.  It's been fun and Brent wishes the guys all the best.  (And he'll surely be working with some or all of them again at some point in the future, when time allows.)
This recording of "Stray Cat Blues" originally by the Rolling Stones is probably Brent's favorite from hours and hours of recorded rehearsals.  Hopefully, Fugue State will be posting some other recordings in the near future. (CLICK HERE TO LISTEN)

Performed at Taipei's A House Cafe, this is only the second live performance of this song. Furthmore, it's performed entirely acoustically - one guitar and three voices - so it's considerably different from the original recording.  Check out some of Terry's other work HERE.
This show would be the last time Brent would get to perform with Daniel St. Clair - also performing that night with Fugue State - who returned to the U.S. to get his teaching certification only a couple of days later.  We miss his excellent drumming, unyielding optimism and good cheer, but we're happy that he's doing well in his current endeavors.  Come back soon, Daniel!

3) Hagen Music's 1 YEAR ANNIVERSARY!
On a final note, we'd like to celebrate our web site's first anniversary and we'll be posting some new things in celebration when we can, but more importantly we'll be reviewing what we've accomplished up to now on the Hagen Music Facebook Page.  Here's to another year!